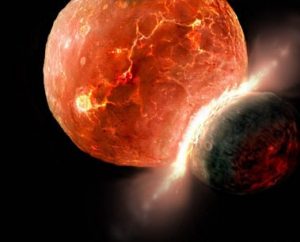 During my master’s thesis, David Stevenson and I worked to understand core formation in Earth during impact driven planet accretion, because the style of core formation plays an important role in the determination of age of the Moon and the Earth.

Our study emphasizes the importance of chemical mixing between the silicate mantle and metallic cores of the impacting bodies. We show that the enrichment of siderophile 182-W in the Earth’s mantle is likely a result of incomplete mixing and a later giant impact less than 4,500 million years ago. Initial calculations with the short-lived Hf-W chronometer overestimated the age of core formation.  The scientific problem is illustrated here.

Dahl & Stevenson EPSL (2010): Turbulent mixing of metal and silicate during planet accretion – And interpretation of the Hf-W chronometer Press release