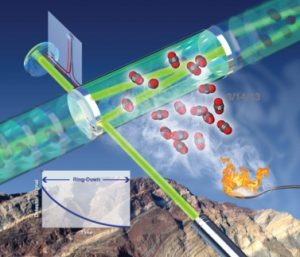 In a study led by David Balslev-Clausen, we measured carbon isotope compositions in rocks to compare the performance of conventional mass spectrometry and the brand new laser-based technique. The two instruments have almost identical front ends. That is, samples are introduced the same way and carbon is combusted in the same type of furnace to produce carbondioxid that will be separated by same means from other gasses (such as water) before the isotope ratio of 13C and 12C is ultimately determined at the analyzer.

Our comparison shows that the analytical precision achieved with the laser-based detector is 0.03‰ (1 standard error, n = 420) with 7 minutes of analysis. This is as good or better than conventional mass spectrometric analysis, despite the fact that laser-based instruments only were first presented in 2009 (Zare et al. PNAS, 2009), while mass spectrometry has existed for more than 60 years with Danish geophysicist Willi Dansgaard pioneering these efforts.

We found that the main source of uncertainty is not the detection method, but isotope fractionation associated with the combustion module. At various dilution of a carbon reference material and pure quartz (carbon-free), isotope differences of 0.3‰ would appear from the analyses. Since quartz is pure and not combustible, the extra uncertainty must come from combustion and not from the detector.

Consequently, the combustion module obscures the 13C/12C data of real materials (of various purity) well beyond the uncertainty of both detection methods. Until the isotope bias associated with combustion is overcome, there will be little gained for the geochemist from improving precision on the detectors. The good news, however, is that for many bio- and geochemical applications the uncertainty of 0.3‰ is acceptable and both techniques provide useful data. To prove this, we reproduced a +2‰ isotope excursion from a 500-496 million years old geological succession, known as the ‘SPICE’ event.