What regulates O2 on Earth?

In our research group, we seek to understand how environmental parameters are controlled on Earth. Uranium (U) is sourced to oceans via rivers and is slowly removed in both oxic and anoxic ocean settings giving it a long residence time relative to ocean mixing time scales. U is retained in carbonate rocks that also record the carbon (C) and sulfur (S) isotope compositions of contemporaneous seawater.

We propose that the combination of C, S, and U isotope compositions in carbonate rocks record both the sources of oxygen in the atmosphere and oceans as well as the extent of global marine anoxia. To test this idea we collected data from the Georgina Limestone formation, where the 500 million year old SPICE event is recorded in microcrystalline calcite (micrite). Our data documents a systematic negative -0.17‰ dU238 excursion indicating a global expansion of the anoxic U sink at the onset of the SPICE event, see figure 1. The negative excursion is greater in magnitude than the Cretaceous Oceanic Anoxic Event 2 (OAE2. ) and smaller than observed in  the End-Permian (~251 Ma), when animal ecosystems suffered from the largest mass extinctions in animal history.

Georgina limestone data. Note the negative d238U excursion at the onset of the positive d13C and d34S excursions, indicate of expanding anoxia at the global scale (elsewhere than in the Georgina basin).

Dynamic modelling allowed us to combine U with C and S isotope compositions in the same rock sections to model the oxygen dynamics of the evolving Earth at that time. Specifically, we have tested assumptions used in leading Earth system models (Redfield-Revised and COPSE) that state ocean anoxia are propelled via a positive feedback loop between ocean anoxia, P availability, and primary productivity (blue boxes in figure 2). Indeed, anoxia expanded in the ocean at the onset of the SPICE event. In the Earth system models it is the rise of atmospheric O2 (a result of enhanced primary productivity and organic carbon burial) that prevents anoxia from expanding infinitely. This sequence of events fit well with anoxic zones expanding during the onset of an anoxic event. However, it also demands the disappearance of anoxia in concert with the relaxation of enhanced primary productivity and organic carbon burial. 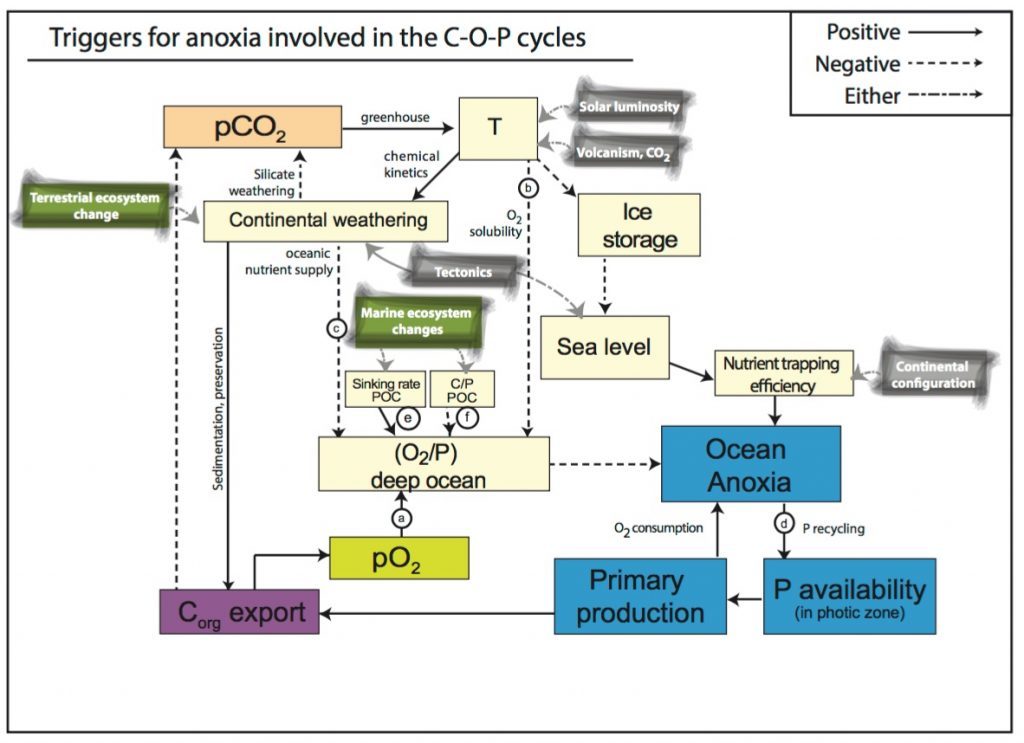 Feedbacks at play in the global Earth system between the carbon (C), oxygen (O2) and phosphorous (P) cycles. Oceanic oxygen levels (and the lack hereof, =anoxia) is thought to be regulated via a positive feedback loop (blue boxes) involving marine P availability and primary productivity. Using a new geochemical proxy we have tested if this feedback operated at the global scale ~500 million years ago. Indeed, this may well be true, but the emerging picture appears that anoxia comes in many flavors, and the feedbacks at play are more subtle than first thought.

Surprisingly, ocean anoxia retreated well before the relaxation of the carbon cycle. We discuss three possible explanations for this. One suggestion is that the SPICE event continues a few million years due to enhanced weathering on land. Alternatively, sulfide disappear from the sulfidic zones mid through the event (establishing two distinct anoxic stages) or U isotope fractionation depends on marine sulfate (or sulfide) levels. None of these solutions are simple, and therefore warrants further investigations.

Most importantly, we have developed a framework to test whether anoxia plays a role on stabilizing atmospheric O2 using a combination of C, S, and U isotope records.