← Molybdenum reduction in nature
Oxygenation of the Earth’s oceans →

The reason for the first of the five biggest mass extinction events in animal history has long been a matter of scientific debate. New geochemical evidence suggest anoxic waters played a key role in a complex interplay of glaciation and sea level drop.

In collaboration with Emma Hammarlund, we investigated the chemical composition of the oceans during the End-Ordovician mass extinction events. In two strikes occurring within ~1 million years, 86% of all marine animal species went extinct. This marine catastrophe has previously been attributed to a cooling event of a warm Earth, as a glacier can be seen to grow on the South Pole, and to increased O2 content in the ocean.

There is little doubt about the cooling of the Earth at this time (even though the Earth remained relatively warm), but the areal coverage of  oxygenated habitats for animals is still a matter of debate. Emma led the investigations of anoxic water masses in the Late Ordovician oceans using on a series of redox sensitive elements and their isotopes in geological deposits from Scotland, China, Austria and on the Danish island, Bornholm. Most importantly, the sulfur isotope composition follow a similar trend everywhere in a fashion that can be ascribed to a global sulfide crisis consistent with anoxic water masses  spreading a greater portion of the oceans. This expansion of anoxia would reduce animal habitats, because all animals respire oxygen and suffocate after long exposure in anoxic waters. 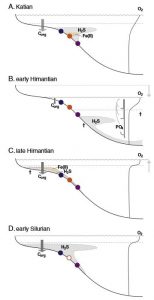